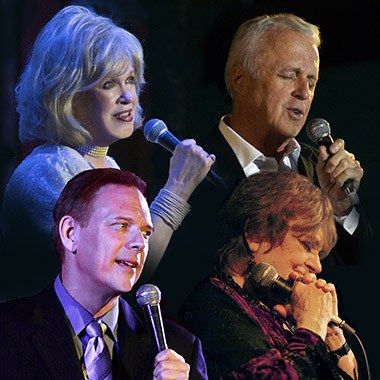 Gershwin never sounded so good! If you aren't in love, when you get to the theater, you will be by the time you've heard this vocal valentine.

What a lovely way to celebrate Valentine's Day. This production will feature Sue Raney, Michael Dees, Kurt Reichenbach and Pinky Winters, each singing  songs  from The George and Ira Gershwin canon. The musical director is pianist Jim Cox. Bill Reed will provide an ongoing storyline. The 20-or-so songs will be drawn from such George and Ira Gershwin classics as: Fascinating Rhythm, The Man I Love, Looking for a Boy, Someone to Watch Over Me, 'S Wonderful, How Long Has This Been Going On?, I've Got a Crush on You. . .

Sue Raney has recorded 17 albums and appeared on countless TV variety shows. Sue has performed widely both in the U.S. and internationally, including five tours of Japan. Her latest CD, “Listen Here” with Alan Broadbent, is the classic example of artistic collaboration !

Michael Dees is one of the most widely heard voices in America. Whether performing songs on television, feature films, or commercials, Dees’ musical career has been extraordinary. With his ultra‐smooth vocals, Dees is the consummate singer.

Kurt Reichenbach's sly interpretations of the Great American Songbook, have earned him recognition as a formidable talent by numerous critics, such as Rex Reed, "... a dazzling singer... words fail to adequately describe the thrill of hearing someone with this much talent and class."

Pinky Winters has created stellar recordings and continues to be featured in choice concert settings. In April of 2013, Winters will return to Japan for her fifth extensive performing tour there. Pinky’s most recent CD, Winters in Summer: Pinky Winters Sings Bossa Nova, was released in 2011.